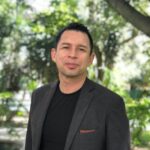 Victor M. Larios has received his PhD and a DEA (French version of a MS program) in Computer Science at the Technological University of Compiègne, France and a BA in Electronics Engineering at the ITESO University in Guadalajara, Mexico. He works at the University of Guadalajara (UDG) holding a Full Professor-Researcher position at the Department of Information Systems and he is the director of the Smart Cities Innovation Center at CUCEA UDG Campus. Besides, Dr. Victor M. Larios is the founder of the UDG PhD in Information Technologies in 2007, and has been leading projects in Guadalajara between academy, government and high tech industry as IBM, Intel and HP focusing his research to distributed systems, parallel computing, data analytics and visualization, serious games and smart cities. During the year of 2013, Dr. Victor M. Larios was a consultor and elected the Director of Science and Technology for the Guadalara Ciudad Creativa Digital A.C. project. Since July 2013, Dr. Victor M. Larios as volunteer, is the Guadalajara City Local Leader for the IEEE Smart Cities Initiative. In addition, Dr. Victor M. Larios is an IEEE Senior member with a valued membership of 22 years and as is the current secretary of the IEEE Computer Chapter at the Guadalajara Section.

All session by Victor Larios