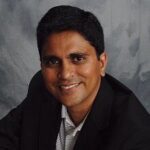 Pranav Patel is the founder and CEO of ResiliAnt/MediTechSafe. He is also a board member in Centum Electronics and Adetel Group. Pranav is a thought leader, an innovator and a serial entrepreneur. Pranav previously served in business, operations and commercial leadership capacities with GE and Siemens, mostly recently as General Manager of GE Healthcare’s North American services business. He has been an early innovator in the Big Data and Artificial Intelligence space. Pranav has led start-up of multiple businesses including an Energy Storage company.

All session by Pranav Patel