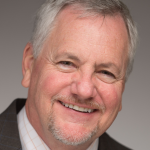 Seven-time founder, R. Page Heller, is familiar with moving innovation from the lab-bench to the marketplace. Currently, Mr. Heller is the CEO of startup Endpoint Security, a cybersecurity company for the Internet of things.

He is a Professional Engineer and Certified Licensing Professional bringing technology commercialization to his startups. In addition to Endpoint, Mr. Heller founded and operated six companies in the electronics, software-as-a-service and energy sectors. He served as CEO for Micon Engineering, an electronics design firm designing industrial control systems for 3M, General Electric, Schlumberger, Pirelli, NASA and others. His company designed products for a variety of application areas from outer space and ocean floor.

He was later employed by The Texas A&M University System office of technology commercialization as the Interim Executive Director, where he served for 17 years shepherding the office from two million to ten million in royalty revenues. He conducts courses in Korea, Canada, Russia, Kazakhstan, Chile, Mexico and other international venues. He most recently worked at the University of Notre Dame in the IDEA Center.

All session by Page Heller