This is a single blog caption

SAN FRANCISCO–(BUSINESS WIRE)-– June 15th 2020, The IoT Community (Internet of Things Community), the world’s largest community of CxOs and IoT professionals and practitioners, announces the appointment of Dr. Tom Bradicich as its new Advisory Board Chairman as the organization gears up for its next growth phase. It follows the recent announcement that Hewlett Packard Enterprise (HPE) had joined the IoT Community as an elite Diamond Member, which forms part of the member-based association’s strategy to build scale and pursue ambitious expansion plans, both organically via strategic corporate membership and partnerships.

Dr. Tom Bradicich is the Vice President, Hewlett Packard Fellow, and Global Head of Edge and IoT Labs, at HPE. He is a member of the IoT Community Advisory Board and had been appointed the Chair of the IoT Community’s Converged Edge Center of Excellence, alongside other IoT heavyweights and thought leaders, who are leaders across various business executive positions. 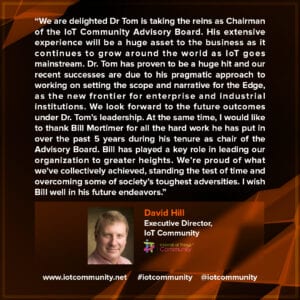 Dr. Tom has held multiple VP, GM, and Fellow positions at IBM, National Instruments, and HPE. He holds several U.S. patents in computer architecture and converged IT systems design, and BSEE, MSEE, and PhD degrees. He is a sought after keynote speaker and lecturer on leadership, business innovation, and technology trends, and has served adjunct faculties at several universities. He founded the homeless charity, sockrelief.com. In addition to being an independent director for Aspen Technology, Bradicich currently serves on the Advisory Board and Diversity and Inclusion Committee for the University of Florida.

“We are delighted Dr Tom is taking the reins as Chairman of the IoT Community Advisory Board. His extensive experience will be a huge asset to the business as it continues to grow around the world as IoT goes mainstream”, says David Hill, Executive Director, IoT Community. “Dr. Tom has proven to be a huge hit and our recent successes are due to his pragmatic approach to working on setting the scope and narrative for the Edge, as the new frontier for enterprise and industrial institutions. We look forward to the future outcomes under Dr. Tom’s leadership. At the same time, I would like to thank Bill Mortimer for all the hard work he has put in over the past 5 years during his tenure as chair of the Advisory Board. Bill has played a key role in leading our organization to greater heights. We’re proud of what we’ve collectively achieved, standing the test of time and overcoming some of society’s toughest adversities. I wish Bill well in his future endeavors.” 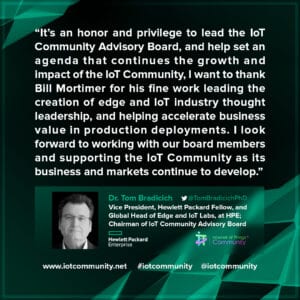 “It’s an honor and privilege to lead the IoT Community Advisory Board, and help set an agenda that continues the growth and impact of the IoT Community,” commented Dr. Tom Bradicich. “I want to thank Bill Mortimer for his fine work leading the creation of edge and IoT industry thought leadership, and helping accelerate business value in production deployments. I look forward to working with our board members and supporting the IoT Community as its business and markets continue to develop.”

“We welcome Dr. Tom Bradicich to his new post as Chairman of the IoT Community Advisory Board, where his experience in converged IT/OT and the Edge will influence how the IoT Community approaches this critical inflection point for the ecosystems we serve. Dr. Tom’s deep technical and organizational management expertise will complement and enhance the strategic value delivered by the existing Advisory Board,” added Bill Mortimer, former Chairman of the IoT Community Advisory Board. “Dr. Tom has an impressive track-record for fostering innovation and launching new products in enterprise IT and OT markets, making him an invaluable participant on our board and the right leader to take the IoT Community to the next level. On a personal note, I would like to thank the IoT Community owners and leaders, David Hill and Kevin Grant, for giving me the opportunity to serve as the Chair of this prestigious group, taking a journey that started in 2015 and has led to heights we could only have imagined. I look forward to staying involved with the Advisory Board and continue to serve as Chair Emeritus for the group.” 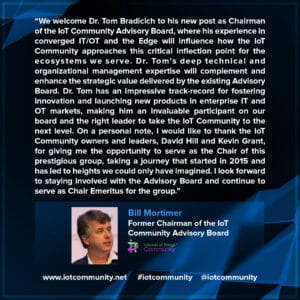 Mortimer was a founding pillar in the setting up and gearing up needed for IoT Community to become a leading member association. During his tenure, IoT Community experienced great accomplishments and charted several directions. Under Mortimer’s leadership, IoT Community launched several industry first’s and hosted eleven coveted IoT Slam events. Within the organization, Mortimer championed equality at all levels and created a more inclusive culture. Mortimer executed on the global organization’s purpose of becoming the world’s foremost thought leader in the IoT industry, and guided the evolution of IoT Community into a leading-edge purpose-led organization.

The IoT Community is the world’s largest CxO community of senior business leaders and IoT practitioners consisting of 23,500+ members. The function is to focus on adoption and application of IoT in commercial environments, overcoming the variety of barriers, inhibitors, and technical and operational issues. For more information about IoT Community, visit http://www.iotcommunity.net Twitter: Follow @IoTCommunity @IoTChannel or hashtag #IoTCommunity, LinkedIn: https://www.linkedin.com/company/9370944/

How Awesome is IoT Slam?