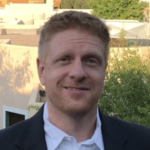 Tom Anderson, is an experienced entrepreneur and previously founded Novint Technologies, a robotics company that created the world’s first consumer 3D touch device. He was one of the earliest pioneers in the field of haptics (adding the sense of touch into computers/VR). He led fundraising of over $34 million, licensed tens of millions of dollars of game development, got national distribution, and took the company public. His Novint patents were sold to Facebook. He founded Devvio in Albuquerque, New Mexico, USA.

All session by Tom Anderson

Security, Privacy and Trust in IoT Center of Excellence Panel