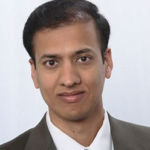 Dr. Thyagarajan Nandagopal serves in the Directorate of Computer & Information Science and Engineering (CISE) of the National Science Foundation. He is the Deputy Division Director (DDD) for the Division of Computing and Communication Foundations (CCF).  Prior to his DDD position he managed wireless networking and mobile computing research within the Networking Technologies and Systems (NeTS) program at NSF.  He has been with the Foundation since February 2012. He has managed networking and mobile computing research within the NeTS program, and contributed to several other crosscutting programs, including Spectrum Efficiency, Energy Efficiency, and Security (SpecEES) and Industry/University Collaborative Research Centers (IUCRC). He has built coalitions in support of new research directions, including leading the establishment of the Platforms for Advanced Wireless Research (PAWR) program, which has garnered $50 million in cash and in-kind contributions from an industry consortium of about 30 wireless networking companies and technology associations. He serves as co-chair of the Wireless Spectrum Research and Development (WSRD) Interagency Working Group. Before joining NSF, Dr. Nandagopal spent 10 years as a Member of the Technical Staff at Bell Labs/Alcatel-Lucent Bell Labs. His research interests dealt with networking in the cloud, green networking, and software-defined networks. In this role, he helped pioneer the development of the first commercial carrier-grade software-defined network platform (ALU 9980 AINP) between 2006 and 2008, with industry-leading features such as service-chaining and network function virtualization. He also worked extensively on wireless ad hoc/mesh networks and sensors/RFID systems, with specific focus on algorithms for enabling efficient operations of these systems. Dr. Nandagopal holds 38 US patents awarded and several patents pending and has published numerous papers in highly regarded conferences and journals in the field. He has also served as program chair or co-chair for many technical program committees, and Associate Editor for IEEE Transactions on Mobile Computing. Dr. Nandagopal is a Fellow of the Institute of Electrical and Electronics Engineers (IEEE). Dr. Nandagopal holds a Ph.D. in electrical engineering from the University of Illinois at Urbana-Champaign (UIUC); M.S. degrees in applied mathematics and computer engineering from UIUC; and a B.Eng. in electronics and communication engineering from Anna University (Chennai, India).

All session by Thyaga Nandagopal