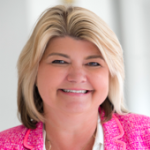 Sandy Carter is the AWS Vice President, Worldwide Public Sector Partners and Programs. In her new role, she will be responsible for driving next-generation partnering. Her responsibilities include evolving partner models to intensify partner innovation, AWS cloud adoption and creation of mission critical cloud solutions with partners across public sector. Her impact will be growing the partner ecosystem as a major driver for public sector and contributing significantly to the success of Public Sector customers.

Prior to this role, Sandy built an enterprise workload team as the Vice President of Windows and Enterprise Workloads at Amazon Web Services (AWS) focused on helping companies innovate using their current technology and assets with migration and modernization through containers and serverless. She led the team to overall growth with AWS now hosting nearly two times as many Windows Server instances in the cloud as Microsoft, per IDC. She led her engineering team to optimize SQL Server on AWS which exhibited 2X+ better price/ performance than Azure per ZK Research. For her leadership on the VMware Cloud on AWS business, she led the team to deliver results of 4x the number of customers year over year, with those customers having deployed 9x the number of VMs now vs 1 year ago. Finally, she grew the number of competency partners by 3x and the number of ISV validated solutions by 4x in the last year.

She is the author of Extreme Innovation: Three Superpowers for Purpose and Profit, built on her research with Carnegie Mellon. Sandy was named Lifetime Achievement Winner, ‘Excellence in Cloud Achievement’ for 2019, AI Innovator of the Year Nominee in 2019, Top 10 AI Influencers for 2019, Top 10 Cloud Computing Influencer, Top 39 Engineers by Business Insider 2018, Top 50 AI influencer by Onalytica 2018, Top 10 Future of Work influencer in 2018, and Top 10 Women in Technology by CNN.

Sandy is the Chairman of the Board of Girls in Tech, and an adjunct professor at Carnegie Mellon University Silicon Valley. Last year, Girls in Tech had over 125K women participate in their “Hacking for Humanity” initiative, and trained over 90K women globally on coding through boot camps, and workshops. She was honored two times with the AIT United Nations Member of the Year award for helping developing countries with technology. She is an Advisor to startups in AI, IoT, and AR/VR.

All session by Sandy Carter

Keynote – Things that think: the rise of cognitive IoT business

Inspirational Female Founders Who Rock the Internet of Things

Inspirational Female Founders Who Rock the Internet of Things OD