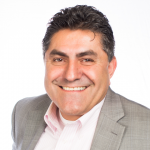 Nader Fathi is a serial entrepreneur and veteran of the Big Data and IoT industry. He is currently the CEO of Kiana Analytics, a Big Data company that helps brick-and-mortar businesses to strengthen on-site security and understand visitor behavior. He was CEO of SigmaQuest, a Big Data for Supply Chain solution, which he co-founded in 2002. Camstar Systems successfully acquired SigmaQuest in 2010 and Nader lead its Supply Chain Quality practice until 2012. Nader mentors and advises startups as the Executive-in-Residence (EIR) at the University of Southern California Stevens Institute for Innovations and the Plug and Play Tech Center in Silicon Valley. He is currently on the advisory board of Glassbeam, Machine-to-Machine analytics. He has coached Big Data companies in various vertical markets including sports, retail, finance, health/fitness, and environmental analytics. Previously, Nader held executive positions at IntraStage, IKOS, Cadence, and Daisy systems. He started his career as software and chip designer at Xerox Microelectronics.Nader holds a bachelor and masters in electrical engineering from the University of Southern California and completed his coursework toward a Ph.D.

All session by Nader Fathi