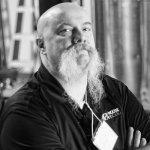 All session by Deral Heiland