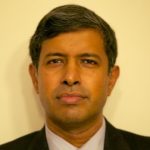 Ananda is Founder & CEO of Trackmybeat Healthcare, a start up company, which works in the space of remote healthcare.

Ananda has been an active member of the Continua Health Alliance – a global alliance, which was merged into Personal Connected Health Alliance, now under HIMSS (USA based), and received an award for his contributions in creating and driving standards on connected health in India.

All session by Ananda Sen Gupta