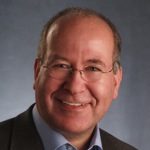 Dr. Kloeckner has extensive experience in building and transforming global teams and businesses and advising clients on digital transformation. He has led many innovative software products through their entire lifecycle from incubation to market leadership and has had P&L responsibility for software businesses. He has held executive leadership positions in business and technology in Germany, the UK and the USA. Until his retirement in September 2017 as Chief Technology Officer of IBM Global Technology Services, he was responsible for building an AI-driven technology platform for next generation infrastructure services for hybrid cloud environments, enabling a shift from a people-based to a technology-based business model for services. During his 33-year career with IBM, he has been at the forefront of technology innovation. As General Manager, Rational Software, he transformed IBM’s development tools portfolio to DevOps and Continuous Engineering for IoT. As CTO of IBM’s first Cloud Computing initiative he created the Beta for IBM’s first public cloud. As CTO of IBM Software Group, he introduced lean and agile development at scale throughout the company. As development leader for Tivoli, he evolved the portfolio towards service management. As CTO for WebSphere he developed the technical strategy for service-oriented architectures within IBM’s application integration middleware platform. As Director of the Hursley Lab in the UK and VP of Business Integration Development, he grew IBM’s message-oriented middleware to a full integration portfolio including IBM’s first Enterprise Service Bus. As Director of the German Software Lab, he developed IBM’s first workflow management system. Dr. Kloeckner holds a PhD in Mathematics from Goethe University Frankfurt and an honorary Doctorate of Science from the University of Southampton. He is also an Honorary Professor in the Department of Computer Science at the University of Stuttgart. He co-wrote a book on ‘Transforming the IT Services Lifecycle with AI Technologies’.

All session by Dr. Kristof Kloeckner

Best Practices for AI in Digital Transformation – Experiences from IT Services